I can hear you: What? With so many famous Genesis' songs why on Earth did you choose this one? And why did you choose a song from that nearly pop album? Calm please, calm... I'll explain everything. First: "...And Then There Were Three..." was not only my first Genesis album, but even the first prog rock LP I ever listened to. But I don't present here this track just because it's a sweet memory... I do think it's one of the greatest short prog songs ever. Yes, I do. 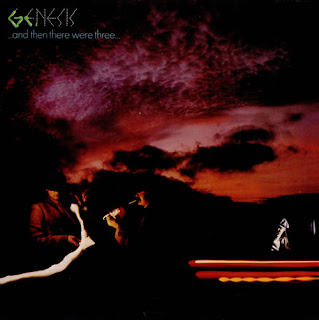 The sunset of an era: "...And Then There Were Three..."
All is perfect here: there's a wave of energy and a bit of melancholy, a highly creative rythm section and a well found tune, an impressive wall of sound and two flawless tempo changes. The intro of the song is one of my favourite passages: a feeble keyboard chord develops into a sound blast via Mike Rutherford's bass guitar. There's also an inusual anger in the lyrics where one could identify a reference to the recent goup's changes in both line-up and musical choices. However, IMHO this is one of the last great prog sosngs of the '70s and one of the strongest opening songs in a rock album. Ever. Yes, ever.
Pubblicato da Domenico D'Alessandro a 12:52