This dutch band always suggest mixed feelings: some say it's the most hidden treasure of the Netherlands, some argue it's just a pop band. I think they're really good: tue, they like melodies and also short songs, but is this a deadly sin? This 9 minute song, taken from their second self-titled album, shows how much fantasy they have both in composition and arrangements and how rich their palette is, filled with pastoral prog foggy nuances, sharp guitar flashes à la David Gilmour and - why not? - brilliant and catchy themes. That's why I like them and I still listen to this track. 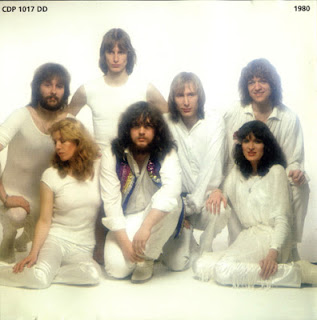 An early '80s Kayak line up.
...But why sould you listen to this? Well, if you like bitter-sweet shiftings, romantic (but no pathetic) moods and well-built prog songs this is your cup of tea. Oh by the way, let me know what you think of those lyrics focusing on the end of adolescence.
Pubblicato da Domenico D'Alessandro a 12:27

Email ThisBlogThis!Share to TwitterShare to FacebookShare to Pinterest
Etichette: 1974, 70s, Kayak, The Netherlands