When I first listened to Arena's debut album and its epic sounds I was strongly reminded of Indiana Jone's saga... and after all there are so many archeological and biblical names in "Songs from The Lions Cage"! Do you remember? Midas, Jericho, The Valley of The Kings, Solomon... but I adored this relatively short track, really I don't know why. Maybe it's John Carson's heartfelt's interpretation, or Steve Rothery's dreaming guitar, or - more simply - that beautiful melody. Anyway, I still listen to this song when I'm searching for inspiration... yes, I'm getting old! 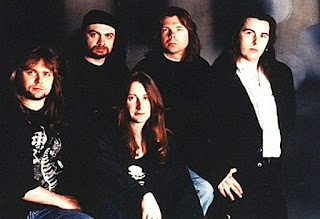 Arena in a '90s shot.
Just a little more: this is the fourth part of a series. You'll find "Crying for Help" I, II, III and IV on "Songs from The Lions Cage", while the band's second album "Pride" features four more parts. They're all beautiful variations, most of them instrumental ones. Many fans liked them so much that in 1997 Arena decided to complete and collect the series in a separate album called "The Cry", where each part was given a new title and some were added or reinterpretated. That's the case with our track, called "Only Child" in the new version. Of course, Rothery was back for a new solo. ﻿
Pubblicato da Domenico D'Alessandro a 10:43