According to many critics and handbooks, this is where it all began. Well, not the track itself, maybe, but its album, "In The Court of The Crimson King", the 1969 King Crimson's debut masterpiece, would be the first truly prog rock album. True or false, I always get a thrill when Greg Lake begins: "The wall on which the prophets wrote..."; his voice is still and sad, like a wise man without hope. The airy melody, the perfect dialogue between keyboards and guitar, the essential and clear percussions, the prophetic lyrics by Peter Sinfield... there's all I need to fall in love with a prog song. 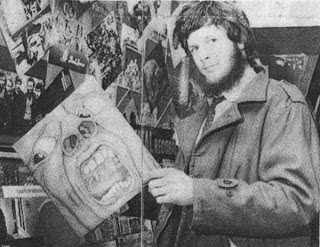 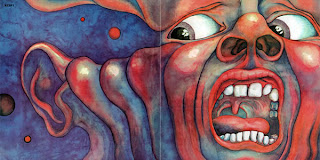 ...and his cover art for King Crimson's debut album.


Two instrumental interludes called "March for No Reason" and "Tomorrow And Tomorrow" enrich the flavour of this tasty dish, but there is another special feature, that's the cover art, a milestone in prog rock history. I can't help staring at the schizoid man and also at the crimson king inside the gatefold cover. From this moment on, the greatest prog music will always be linked to its album art, but if I had to find the strongest connection, well, I'm sure I'd choose this record. Such a pity, the very young author of these drawings, Barry Godber, was going to die a year after the release of his masterpiece. So I daresay, this "Epitaph" is for him too.
Pubblicato da Domenico D'Alessandro a 16:22