Should I say anything on this suite? Who doesn't know the David Gilmour's famous 4 guitar notes on part 2? And what about Rick Wright's cosmic chords on part 1? I had the priviledge to hear them spreading in the open space two times in concert. I'll never forget those moments, never. I prefer the first half of the suite (parts I-V), and I'm sure I'm not the only one, but all parts are very good, full of athmosphere and sense of wonder. "Shine on" is now a standard counting hundreds of followers. I'll just remember Dick Parry's sax adding human warmth to the fresco and the lyrics... they always touch me. 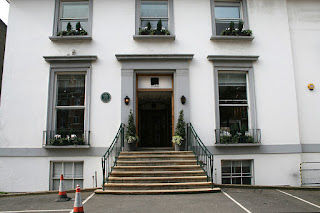 Abbey Road Studios
Some say old friend Syd Barrett came to Abbey Road's studios to pay a visit during "Wish You Were Here" album sessions. I don't know if it's true, but I just like the idea of a momentary reunion giving the final touch to this nusic. I don't even try to discuss here whether Pink Floyd are or aren't prog. It doesn't matter to me: they're part of the '70s "shoot down the walls" experience. So they're in.
Pubblicato da Domenico D'Alessandro a 09:44