This represents a standard in Jethro Tull's music, Ian Anderson at his best, that's to say. I think "My God" represents prog rock in its primary features. You'll find here tempo changes, long instrumental passages (flute, of course, but also acoustic guitar), intriguing lyrics and a cross-style approach. The strong accusation Anderson moves against the Church in the lyrics is supported by a powerful music and the voice's variations between anger and murmur. 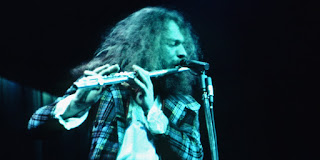 Ian Anderson and his flute in a 1971 concert.


I like the successful mix of rock, folk and classical music in one song, and the flute kills me. I completely changed my opinion on this instrument after "My God": it's not only a rock flute, it's kind of a machine gun, riddling the ears and the heart of the listener. Ian Anderson rules here, adding a warm acoustic guitar to the strength of his flute and voice.


So, after this, how could you tell prog rock is just about elves and romance?
Pubblicato da Domenico D'Alessandro a 13:06